Importance of HVAC and Duct Cleaning

“Duct cleaning is like cleaning fairy dust”, said one inexperienced HVAC contractor.  I wonder if that HVAC contractor has ever opened an HVAC system and examined the coils?  Mr. Duct Cleaner has a lot of pictures of before and after that will show just how much dirt tends to hang out in the HVAC unit.  Most of the time we can write our names in the dust on the plenum.

According to NADCA , through normal occupation in a home, we generate a great deal of contaminants and air pollutants, such as dander, dust, and chemicals. These contaminants are pulled into the HVAC system and re-circulated 5 to 7 times per day, on average. Over time, this re-circulation causes a build-up of contaminants in the duct work.

Recently we performed a job for a gentleman who was sensitive to mold and was unable to sleep in his bedroom comfortably.  He had a mold inspection in his home and a little bit was found under the sink, but nothing significant enough to cause the sleeping problems.  In a last-ditch effort, he called Mr. Duct Cleaner and scheduled a duct and HVAC system cleaning.  Our experienced technician found the coils inside one of the HVAC systems covered in fungal growth.  In the process of cleaning, it was discovered that the drainage line was plugged up, creating the moisture that the fungus needed to grow.  We unplugged the line, professionally cleaned the coils, and then cleaned all the ducts in his home.  A mildistat fog was then applied to the coils.   His system is now running much more efficiently, and he is able to sleep in his bedroom.  Perhaps cleaning the “fairy dust” was helpful.  (I need a font for sarcasm)

It costs nothing to get an estimate from Mr. Duct Cleaner. 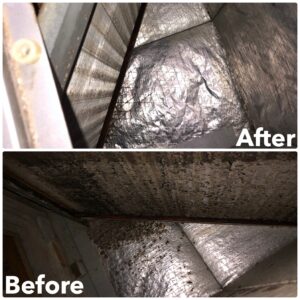 for your FREE estimate and take the first step to cleaner air.